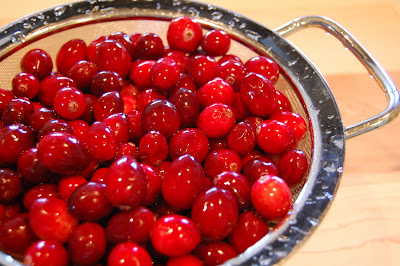 This cranberry sauce is named for my 95 year-old grandmother Mabel, who gave the recipe to me and whom I seem to recall originally got the recipe from her cousin Mildred.
Although Mabel and Mildred were probably preparing this before canned sauces were even conceived, I'm impressed by how well it has stood the test of time. In fact, if you hadn't eaten raw cranberry sauce before, you might think it a modern, fresher alternative to the somewhat stodgy cooked stuff. It offers a pleasingly tart, crunchy contrast to typically rich Thanksgiving side dishes.
Mabel's Raw Cranberry Sauce
1 12-ounce bag fresh cranberries, picked over and rinsed
2 large stalks celery, diced
zest of 1 orange, finely grated
segments of 1 orange, roughly chopped
1/4 cup chopped walnuts
scant 1/2 cup sugar
pinch salt
1 teaspoon minced fresh ginger, optional
Roughly chop cranberries in food processor. Place in mixing bowl. Add celery, walnuts, sugar, salt and ginger, if using.
Finely zest whole orange into mixture in bowl, avoiding white pith. Pare pith away from flesh of orange with sharp knife and discard. Holding orange in hand, cut segments out between membrane as pictured below. Roughly chop segments and add to bowl. Squeeze juice from remaining orange membrane into mixture. 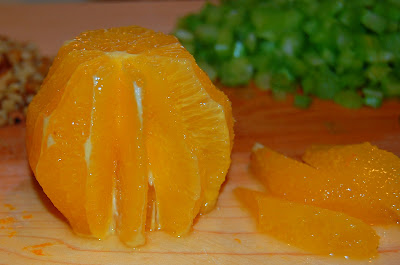 Mix everything together, cover, and let sit in refrigerator for at least 3 hours - preferably up to a day - to allow flavors to develop. (Sauce tastes less tart after it sits a while, so resist adding more sugar at this point.) 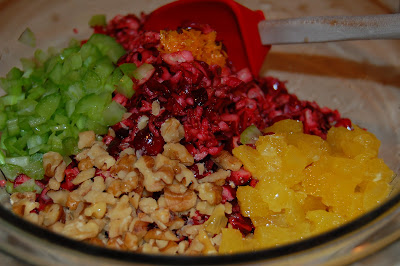 Give sauce a stir occasionally, and taste before serving. If it still tastes too tart, add more sugar to taste. 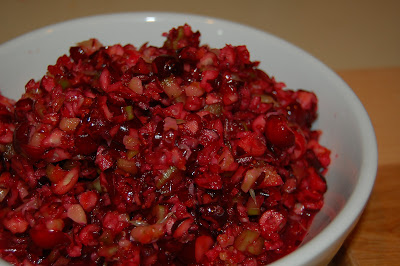 Makes about 3 cups.
Notes: Obviously, my grandmother didn't own a food processor; she actually ran the cranberries through a manually-cranked meat grinder. Also, the optional fresh ginger is my addition, but I like this sauce equally well without it. Finally, the original recipe did not contain salt, but I find it really brings out all the flavors. This is a great recipe to play around with. Fresh pears or pineapple are tasty embellishments.
Posted by Mad River Kitchen at 5:55 PM