For all the people out there who know they should eat more dark leafy greens but either have an aversion to them or don't quite know how to fit them into their diets, this soup is for you. 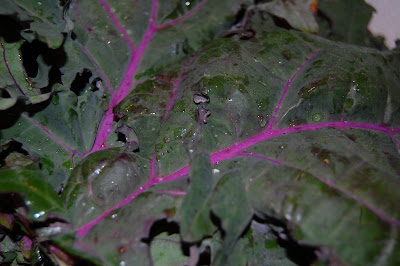 When I saw this gorgeous kale at a local market, I couldn't resist it - but then I had to figure out how to make it palatable to my husband. I have long been a fan of traditional Portuguese potato and kale soup, but since the flavor of kale tends to predominate I knew I'd have to counterbalance it with another assertive ingredient to slip it past him. As luck would have it, the same market also had beautiful all-natural Spanish chorizo - perfect for contributing a bit of smoke and chew. 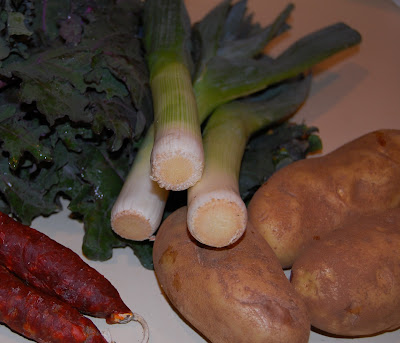 Since I chopped the chorizo in a food processor, a little bit went a long way and I was able to keep the overall fat content low.

I also chopped the kale well before adding it to the pot as a final stealth move; it blended well with the other ingredients and could almost be mistaken for chopped parsley visually. 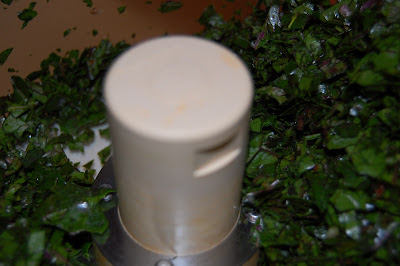 This soup passed the test. Aaron loved it and insisted it was "blog worthy!"

Note: Spanish chorizo is cured pork sausage colored and seasoned with smoked paprika. Portuguese chourico and linguica are similarly flavored, and while the level of spiciness may vary between sausages and brands, all may be used in this recipe. 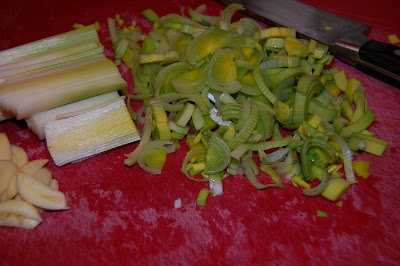 Heat oil in large soup pot over medium high heat. Add garlic and cook until heated through but not browned. 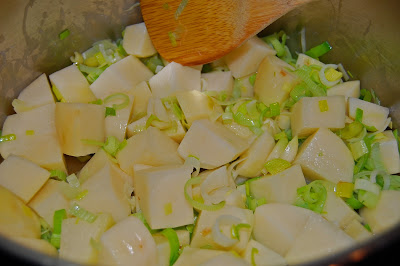 Add leeks, potatoes and bay leaf. Cover vegetables with foil, pressing directly onto surface. Reduce heat to medium low and cook for 8-10 minutes, stirring occasionally, until leeks are softened but not brown and potatoes are "sweating."

Add chorizo and stir to combine. Pour in broth (broth should cover vegetables; add a bit of water if needed). 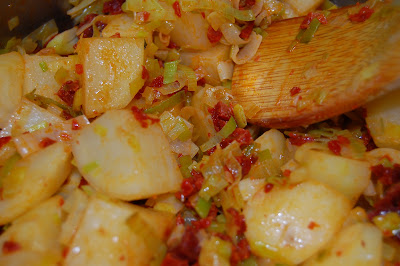 Raise heat to medium-high; bring soup to a simmer.

Simmer soup, covered, until potatoes are soft. If fat rendered from the chorizo appears on the soup's surface, skim excess with a large spoon.

Mash vegetables roughly with a potato masher, leaving some larger chunks of potato for texture.

Add kale; simmer about 5 minutes, or until kale loses its raw flavor. 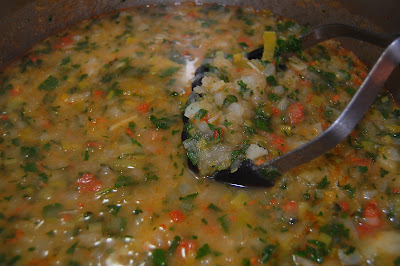 Season with salt and freshly ground pepper to taste and serve.