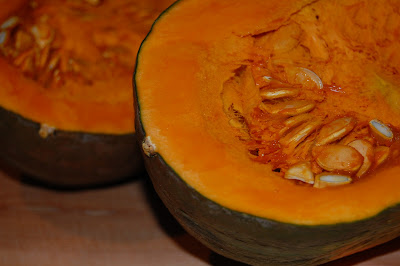 Happy New Year, patient readers!  I'm slinking back to you with my tail between my legs, never having expected to be diverted by the holidays for more than a week. As I said in my last post, I was cooking like crazy - just not chronicling!

It's good to be back. Today, in the aftermath of all the holiday cheer, I took stock of my overflowing refrigerator and knew something had to give. It so happens my mother and father independently sent big boxes of pears for Christmas, and since I've consumed crazy quantities of sugar lately I needed a healthful, savory treatment for the nearly overripe surplus. I spotted this recipe by Deborah Madison at Epicurious, and saw that one positive reviewer had been in the same predicament as me with extra holiday pears. That, and my general love of Deborah Madison's vegetarian cookbooks seemed like good omens. 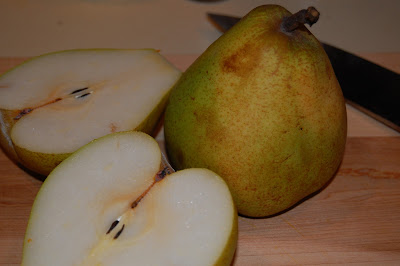 This is a soup of few ingredients, so be sure to start with flavorful ones. I was skeptical I would complete the recipe without feeling compelled to add something (especially when I tasted the stock and it seemed - I'll just say it - disgusting) but I uncharacteristically managed to hold back and was glad I did. 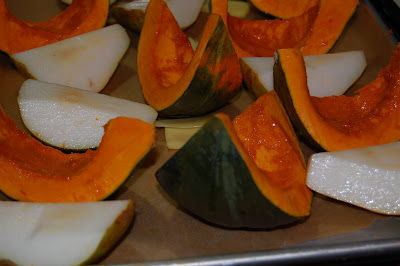 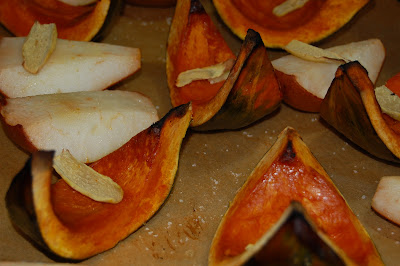 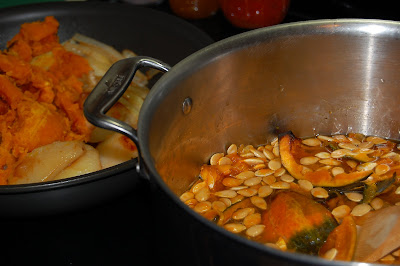 There do seem to be a lot of steps for such a simple soup, but I faithfully trudged along until I was directed at the end to strain the final product or put it through a food mill.  I found this unnecessary and was happy with the texture achieved by the food processor alone. 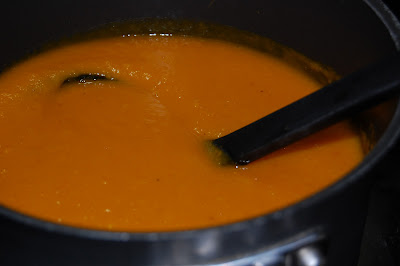 My small personal flourish was a roasted chestnut garnish, mostly because when I see fresh chestnuts at the market it seems wrong not to take advantage. I also substituted Greek yogurt for the sour cream, but honestly, this may be one case where Greek yogurt doesn't quite cut it (I knew I'd find it eventually). In fact, the soup is delicious but borders on cloying and would be perfect with the assertive tang of sour cream to counterbalance its natural sugars. 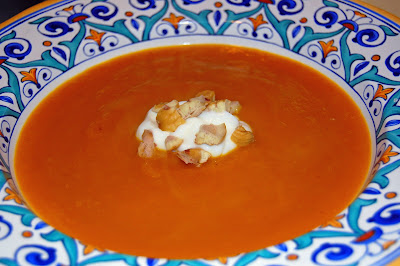 Although for photographic reasons I show the final product in a rather large bowl, it is quite a rich soup and a little goes a long way. It would probably work best in a small cup or mug as a first course rather than as a meal, although on second thought my husband ate a huge serving and would probably disagree.

Let me know what you think!

1. Preheat the oven to 425 degrees F. Cut squash in half, scrape out seeds, then cut each half into thirds. Put the pieces in a large baking dish or roasting pan with the pears and all but a few slices of the ginger. Brush with oil, season with salt, and bake until fragrant and tender, about 1 hour. Turn the pieces once or twice so that they have a chance to caramelize on more than one surface. If the squash seems very dry (some varieties are) add 1 cup of water to the pan to create steam and cover with foil. When the squash is tender, transfer everything from the pan to a cutting board, add 1 cup water to the pan, and scrape to dissolve the juices, reserving the liquid. Scrape the flesh of the squash away from the skins You should have about 2 cups.

2. To make a stock, bring 6 cups water to a boil and add the seeds, and eventually, the squash skins, the remaining ginger and 1/2 teaspoon salt. Lower the heat and simmer, covered, for 20 - 25 minutes.

3. Meanwhile, melt the butter in a soup pot. Add the onion, give it a stir, and cook over medium-low heat, stirring frequently, until in begins to brown a bit and is fragrant, about 10 minutes. Add the pears, ginger, and squash, then the reserved glazing water. Strain the stock into the pot. Bring to a boil, then lower the heat and simmer, covered, for 25 minutes. Cool briefly, then puree until smooth and pass through a food mill or strainer to ensure a silky texture. Serve as is or swirl in the creme fraiche or sour cream.

Note: I peeled the pears after roasting because I didn't really want the peels in the soup. 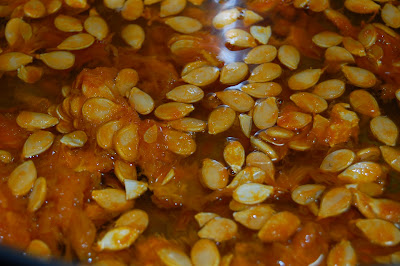 Preheat oven to 400 degrees F.
Score a large criss-cross pattern into the flat side of each chestnut with the tip of a small paring knife. Spread out on a sheet pan and roast for 20 to 40 minutes, depending on size, until the skin peels open at the scored marks. Check one to be sure the peel releases easily from the flesh and the meat is cooked through.
Best to eat or shell while warm, as they are difficult to peel once cooled.
Posted by Mad River Kitchen at 3:19 PM