cauliflower gratin with tomatoes and feta 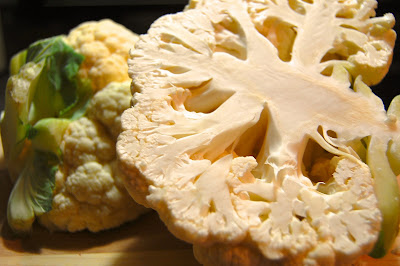 Cauliflower is one of those vegetables people seem to love or to loathe. As with other commonly maligned vegetables, I suspect the trauma of having to eat poorly prepared cauliflower in childhood is to blame.

Even if you like cauliflower, you may find yourself growing bored with your usual preparations and wishing for a new approach. That was the case for me years ago when I first discovered the following recipe in Deborah Madison's encyclopedic Vegetarian Cooking for Everyone.

This recipe makes the most of an admittedly bland but highly nutritious vegetable. Compared to more common gratins which drip with white sauce and cheese, this is much lighter but highly flavored with tomatoes, capers and pleasing chunks of feta. It's not only great hot from the oven, but I find myself snacking on cold leftovers the next day as well. It's also wonderful tossed over pasta with a drizzle of good olive oil and a dusting of freshly grated sharp cheese.

Don't be tempted to leave out the small dose of honey; as the author claims, it really does balance out the acid of the tomatoes and capers to achieve a perfect tang.

I do, however, prefer to skip the cinnamon. If you tend to like cinnamon in tomato sauces or other savory dishes, by all means leave it in!

Hopefully, even avowed skeptics will find new respect for cauliflower once they sample this gratin.

Cauliflower Gratin with Tomatoes and Feta

Preheat the broiler and lightly oil a 2 quart gratin dish.

Heat the oil in a 10-inch skillet over medium heat. Add the onion, garlic, oregano, and cinnamon and cook until the onion is wilted, about 5 minutes. Add the tomatoes, cook for 7 minutes more, then add the honey and capers and season with salt and pepper. Slide the mixture into the dish. 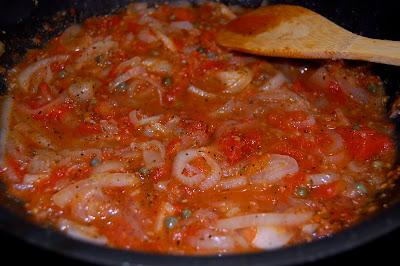 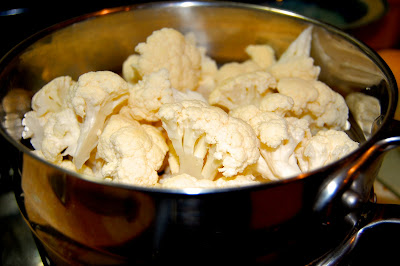 Meanwhile, steam the cauliflower for 5 minutes. Set it on top of the sauce and season with salt and pepper. Squeeze the lemon juice over the top and add the feta. Place 5 to 6 inches under the broiler until the sauce is bubbling and the cheese is beginning to brown, about 10 minutes. Garnish with the parsley and serve. (If you are assembling the gratin ahead of time, cover and bake it at 400 degrees F until bubbling, about 20 minutes, then brown under the broiler.) 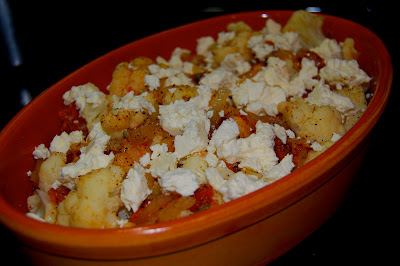 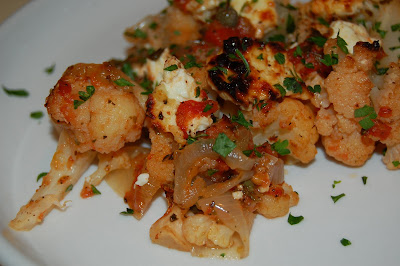 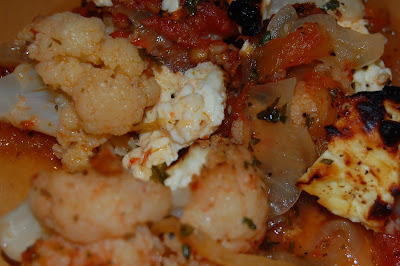 I suggest dabbing a little sauce over the top of the cauliflower (rather than placing it all underneath) so it's not monochromatic coming out of the oven.

This is a great cookbook for new veggie ideas: