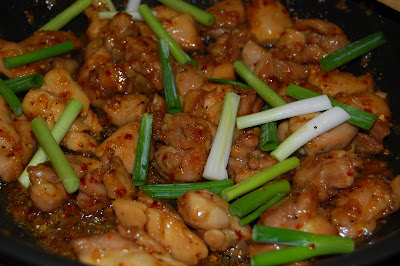 If you read the title of this post and your first thought was - caramel and chicken? - you're not alone. When I told my husband what I was making for dinner, I'm pretty sure he pictured something like caramel apples, with drumsticks in place of apples. He looked stricken.

Fortunately, one taste of this unfamiliar dish disabused him of such worries. First, the sauce hinges on simple caramelized sugar - no melted Kraft's candies in sight. And while it may be sweet, in the way that, say, teriyaki sauce is sweet, it's also surprisingly savory, thanks to the addition of fish sauce. Fish sauce contributes critical umami, but otherwise takes its stinky self to the back of the bus so the garlic, ginger and chili flakes can dominate. Finally, as the sauce develops the chicken attains a light lacquer - as appetizing to look at as it is to eat. All this in one pan in barely half an hour. It's easy to see why caramelized meats and fish are so central to Vietnamese cooking.

This was my first shot at caramel chicken, and in my research I found two approaches to the theme. In one, the sauce is made first, then raw chicken and aromatics are added and stewed until done. The other method, shown below, calls for lightly sauteing the chicken and aromatics first, then adding the sugar and liquid to the pan and reducing it to caramel as the chicken finishes cooking. This may not be the most orthodox technique but it was more appealing to me personally and it worked very well.

The recipe as written is quite spicy, so if you prefer less fiery food I suggest you reduce the chili flakes  to taste. I served the chicken with jasmine rice and steamed asparagus. 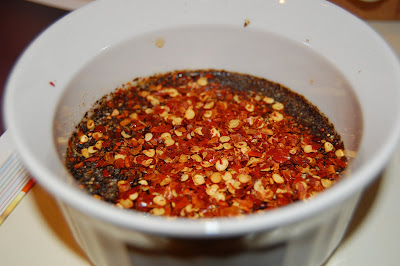 Cut the chicken into big chunks by halving each thigh and then cutting each half into quarters. In a large, deep skillet, heat the oil over medium high heat until a bit of garlic sizzles at once. Add the chicken and cook for about 2 minutes, tossing once or twice.

Push the meat out to the sides of the pan and add the ginger, onion and garlic to the middle of the pan. 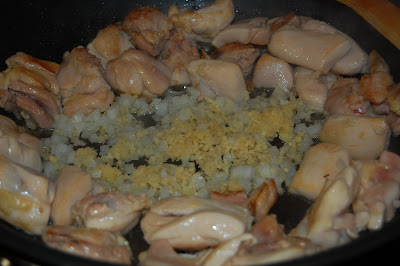 Cook for about 1 minute, and then toss well. Add the fish sauce, both kinds of sugar, the salt, pepper and chili flakes and toss to mix everything well. 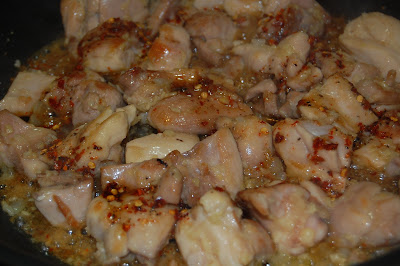 Let the sauce come to a strong boil and begin to thicken, and then add the water. Adjust the heat to maintain a lively simmer and then cook the chicken for 10 - 15 minutes, tossing now and then. When the sauce is a handsome reddish brown syrup and the chicken is cooked, add the green onions and toss well. 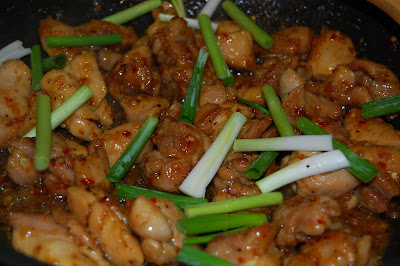 Transfer to a serving dish and serve hot or warm. 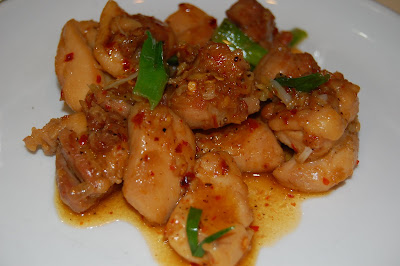 *I used a little less oil (1 1/2 tablespoons) which seemed to be plenty in a non-stick pan.

*I skinned the chicken thighs.

*Don't expect a lot of sauce in the end; it reduces down to the consistency of a thin syrup that coats the chicken without being overly sticky.

*Although the recipe says it serves up to six people, considering American appetites, I think that's pushing it. Four is more like it. 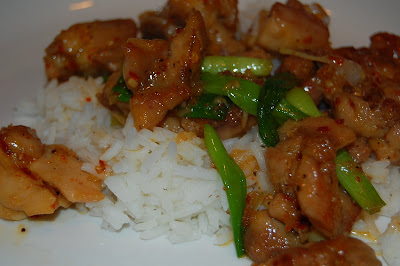 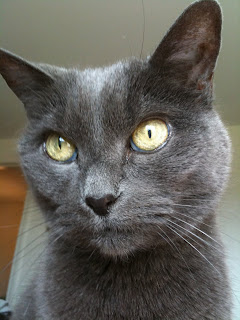 Hi folks... sorry for my unintentional absence the last few weeks! Unfortunately, I'm dealing with a quite pesky and mysterious computer malfunction that has yet to be resolved.

I have every hope that I'll be back this week though, so please check back soon!
Posted by Mad River Kitchen at 2:48 PM 23 comments: