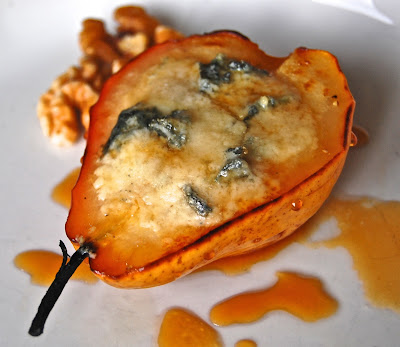 Hello everyone, and thanks for sticking with me after my brief hiatus. I was temporarily derailed by unexpected events and couldn't seem to find my way to the kitchen! But - I finally beat a path back on this blustery autumn afternoon with these alluring, uncomplicated pears.
Pears have a special affinity for any type of bleu cheese; that's why you see them together on restaurant menus everywhere. One of my favorite salads is a quick toss of pears and gorgonzola with greens and walnuts, but it wasn't a salad kind of day and I had pears that needed to be used. These stuffed pears, served warm with a fresh baguette, were an elegant solution to lunch.
If you appreciate the French custom of serving a cheese course after dinner, you might consider serving these instead and skipping dessert altogether. They combine the best of both savory and sweet: a creamy, salty, pungent cheese and lightly caramelized roasted pears. A few freshly toasted walnuts tossed on the plate tie the flavors together and provide essential crunch. 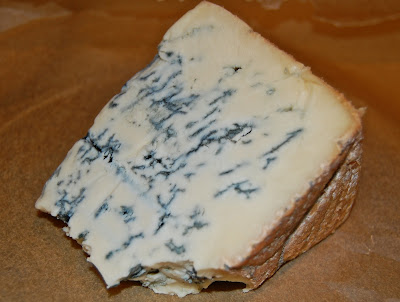 Roasted Gorgonzola Pears
walnut halves for garnishing the plates
fragrant, just-ripe pears (I used Anjous, but use whichever look and smell the best)
maple syrup, about 2 teaspoons per pear
gorgonzola cheese, about 3/4 ounce to 1 ounce per pear, or to taste
Place walnuts in a frying pan over medium-high to high heat and toss or stir regularly until they appear lightly toasted and become fragrant, about 5 minutes. Remove from heat and set aside.
Cut each pear in half lengthwise, through the stem if possible so each half has a piece of stem attached. Remove the cores from each half, leaving a circular dip in the centers for the cheese. Remove a very thin slice from the rounded side of each half to enable them to sit without wobbling in the pan.
Using a pastry brush or your fingers, brush the cut side of each pear half with maple syrup. You want a thin coat of syrup to help create a lightly caramelized surface.
Place pears cut side up on a sheet pan lined with parchment paper or lightly greased with butter. Place under broiler and broil until pears are lightly browned around the edges.
Remove pears from oven and stuff centers with crumbled gorgonzola.
Place pears under broiler again and broil until cheese is melted and pears are tender when pierced with a skewer.
Place one pear half on each plate and drizzle about a teaspoon of maple syrup around the pear so diners can choose to sweeten their pear with more syrup or not.
Scatter walnut halves around pears and serve warm.
Note: Consider the size of your pears when you determine the quantity of cheese with which to fill them. Since the cheese is quite salty, if you're serving the pear alone, without bread, be judicious with the stuffing so as not to overwhelm the pear. You can be much more liberal with the cheese if you're providing bread on the side. 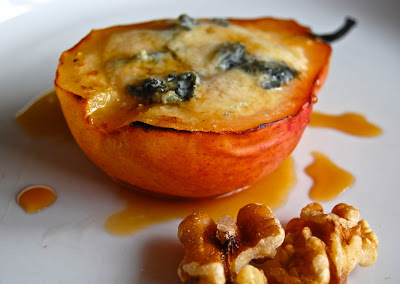